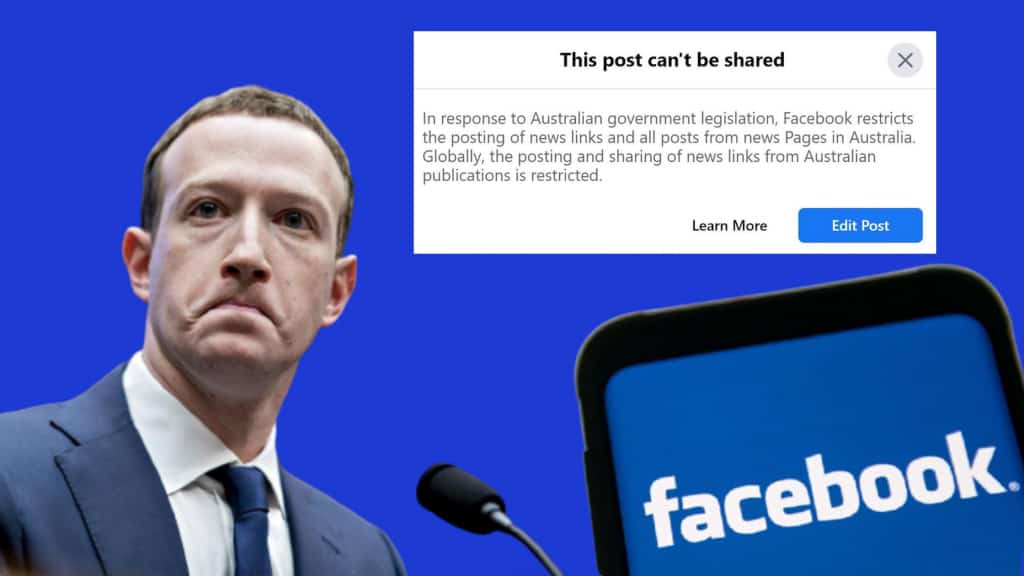 Following a drama-filled 48-hours in the world of digital media, littleBIG social and marketing strategists Kate and Andrew discuss the implications of the Facebook News Blackout for social advertising, PR and how brands can protect themselves.

Australian Facebook users and news organisations are now restricted (banned) from sharing or viewing Australian and international news content on Facebook. This means that effectively, on Facebook in Australia, news is completely blacked out.

The implications for everyday consumers of news via social media are huge. Users won’t be seeing news articles pop up in their feeds and won’t be able to see any posts from news outlets anywhere on the platform, even on an outlet’s profile. Australian users will also be blacked out from international news sources like the BBC or CNN.

For the 52% of Australians that access news through social media every week, the way they now stay informed will drastically change.

Why has it happened?

Facebook opposes this view and has been pointing out to the government that they believe that the “value exchange between Facebook and publishers runs in favour of the publishers”. They back this claim by stating that over the last year, Facebook has generated approximately 5.1 billion free referrals to Australian publishers, asserting this is worth an estimated $407 million[1]

Facebook have said “The proposed law fundamentally misunderstands the relationship between our platform and publishers who use it to share news content.” and that “It has left us facing a stark choice: attempt to comply with a law that ignores the realities of this relationship, or stop allowing news content on our services in Australia. With a heavy heart, we are choosing the latter.”

The current stand-off is extremely damaging to both Facebook and every news outlet in Australia. Facebook’s reputation has taken a huge hit in Australia, particularly as the deletion of accounts affected many “non news” sites like Government Health Authorities and Not for Profits. As this decision becomes more publicised globally, they stand to lose a substantial number of users and reinforce a growing perception of their organisation being a tech bully.

What does it mean for social advertising?

For social this is really simple: you can’t share any news content! If Facebook decides that what you are sharing is news or comes from a news outlet, it won’t let you share it.

More broadly speaking, this action could have an effect on Facebook’s user numbers and traffic in Australia. As many Australians might only browse Facebook as a news source, if that news source is removed, users will look elsewhere.

If that happens, it would certainly have a negative impact on advertisers on the platform in the form of audience sizes, impressions and engagement (news content is rated as some of the highest engaging on the platform).

A more than likely outcome is that we see users returning to visiting news sites directly, not through social. For advertisers, this means more people being exposed to the Google Ads network. Could this be the time to change advertising strategies and place more focus on your Google Ads strategy? Time will tell…

It also demonstrates the truth of a common piece of advice in digital marketing “Don’t build your empire on rented land” – with the constantly shifting landscape, it’s time to ensure you are investing in content and audiences you can own – via growing your edm platform and blogs.

What does it mean for PR?

As we have seen a number of lifestyle publications (Broadsheet, Pedestrian, Timeout etc.) classified as news outlets by Facebook, the reach and the PR value of these publications is sure to change.

Lifestyle publications have heavily relied on Facebook for a number of years and the social reach of a publication is a key factor when publicists are deciding who to pitch to. From a brand perspective, having content shared by a lifestyle publication on Facebook is huge value. Brands love seeing people comment about them on Facebook, it is one of the few places they can see and document real life feedback.

As a result of these changes, lifestyle publications are set to see a huge decline in traffic. It is estimated that Pedestrian TV generates roughly 27% of their website traffic from social media and 85% of that comes directly from Facebook[2].

Publications who are able to generate high value users organically will perform best during this period. We have already seen a number of publications attempting to drive email database sign ups in the past 24 hours in an effort to curate web sessions. However, EDM subscriber lists are considerably lower (less than half on average) than a publication’s social following, so are of lower PR value to brands.

Increasingly we are seeing strong ROI for digitally led influencer strategies, and this trend could continue to grow if brands remain unable to post digital editorial content as proof of third-party endorsement.

littleBIG has been consistently agnostic regarding PR-strategy – always favouring the plan that will best reach and convince the target audience, with consideration for budget. Facebook’s blackout means we’ll likely be weighting influencer engagement and real-world activation higher than media engagement for some clients.

A further rise of misinformation

People who want to correct such misinformation posted by relatives or friends would not be able to reply with a link to a news article.

This is a worrying time for all news outlets and lifestyle publications big and small across Australia. Many will see traffic lost and the value of their content severely impacted. We hope to see a resolution reached in the coming weeks, but the question remains: will this cause lasting damage to Facebook’s reputation?

What should you be doing to protect your brand?

Yes, in basic speak, “it’s a lot”. We’re here if you want to get in touch for help to navigate this quickly evolving digital world and execute some, or all of the strategies we talk about above in a way that’s right for your business and your brand.

Subscribe to our newsletter for marketing tips, tricks and inspo.